You are here: Home / Phonemic 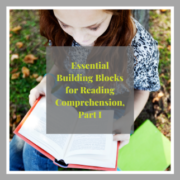 Many of us don’t actually remember learning how to read. We may remember sitting on our kindergarten carpet squares, picking out new picture books at the school book fair, or feeling the excitement of turning the final page of a book read independently for the first time. Those fond memories are certainly associated with the skills one must acquire in order to first learn to read; however, we cannot necessarily remember the actual process of learning how to comprehend the words on the page. Thinking about it now, reading almost seems like an innate skill, as though reading just happens. If only that were the case…

Sadly, reading comprehension can be a labor intensive task for many young learners. Some children can fool us on the surface; they may learn to read fluently, briskly, and accurately, as though they are natural-born readers. However, reading fluency and comprehension do not always go hand in hand. Children may acquire the necessary skills to read clearly and accurately, but, try as they might, these same kids may simultaneously struggle with the ability to digest or comprehend a text. So, if it is not a natural or innate skill, what goes into reading comprehension anyway?

Part of the reason why reading comprehension can be a struggle for many learners is the fact that the process involves a compilation of other complex skills. Such foundational skills necessary for children to begin to master reading comprehension include: fluency, phonemic awareness, accessing prior knowledge/making connections, vocabulary, syntactical rules/conventions, working memory, and attentiveness. 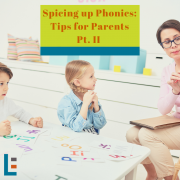 Phonics instruction can be quite tedious, as we have established in part one. However, it doesn’t have to be! Parents can employ the use of different games and challenges to help children build their phonics knowledge at home. Beginning with basic sounds, then corresponding letters, vowel patterns, and so on, children are able to garner more knowledge of phonics and language without the droning, repetitive instruction that we usually associate with phonics lessons in the classroom. See more strategies and activities below!

Rhymes in the car

To help children with rhyming patterns inconspicuously, parents can challenge them to a “rhyme off” to fill the time during a long car ride.

Simply put, a digraph is a combination of two letters (di-) that make one sound. Examples are vast, but some include: ch, sh, wh, ay, th, ph, etc.

This is another phonics challenge that is great for long car rides.

You can also modify the game for children who have not quite mastered the alphabet by simplifying the rules. Instead of going through the alphabet, choose one letter and take turns coming up with names that start with that letter. 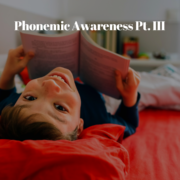 The English alphabet contains the following five vowels: A, E, I, O, U. The letter Y is also considered a vowel when it represents a vowel sound, like “fly” or “lonely.” Vowels make up a small percentage of the letters in the English alphabet; however, the list of vowel sounds that these letters can produce is much longer!  Because there are so many different ways of spelling certain vowel phonemes, learning the appropriate patterns for reading and writing require much more instruction than the “sound it out” method.

For instance, take the diphthong (combination of two vowel phonemes) /aɪ/. This sound can be made using multiple different letter patterns:

So how do we begin to teach these phonological skills when there are so many letter combinations to create these sounds?

As discussed in part II, vowel sounds are a whole new ball game when it comes to reading instruction. For beginning readers, as previously explained, it’s all about initially hearing the difference between short and long vowels. Parents and educators can solidify foundational knowledge about how to distinguish short vowel sounds from long vowel sounds by incorporating repetition and movement.

To introduce short vowel sounds, students will want to practice using familiar one-syllable words with corresponding actions. Parents and/or teachers will recite and model the phrase and motion. Then adults should ask children to recite/perform it back in unison:

In order to introduce long vowel sounds, repeat the phrase, “Long (fill in with vowel) says its name.” This way, children will begin to equate the words that they are hearing to either long or short sounds. This differentiation prepares them for the spelling patterns/rules that correspond to short and long vowel sounds, which they will learn shortly. Examples include:

After children grasp the concept of how these vowel phonemes sound in different words, they are ready to start looking at the letter/sound combinations (diphthongs) in order to correctly read the various vowel patterns.

Another key concept regarding phonemic awareness is the digraph. A digraph is a combination of two letters that make up one sound. Common digraphs include sh, ch, th, and wh. When introducing these sounds, provide visuals or photo cards to accompany the examples of words with digraphs—the more familiar, the better.

Here, you can return to tapping, finger stretching, etc., but instead of tapping syllables within a word, you’ll ask students to tap for the phonemes that they hear in each word. For example, cat and that are both one syllable words; however, students will notice how that has an additional letter. But instead of students tapping out the “t” and “h” sounds separately, the two are combined to form the one sound, the digraph “th.” So while 3-letter word cat is tapped c-a-t (3 phonemes, 1 syllable), 4-letter word that is also tapped using 3 phonemes: th-a-t. 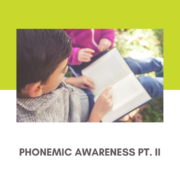 Phonemic awareness, which many experts say should be mastered before first grade, is just the first layer when introducing a child to reading. While the terms sound very similar, moving from phonemic awareness to phonics instruction is actually a rather involved leap. A child who has mastered phonemic awareness is able to understand that sounds are represented by letters in the alphabet, whereas phonics is more complex. It requires the reader’s knowledge of blending those sounds together to form syllables within words.

Closed syllables are the most common form of English syllables—over 50% of all syllables in the English language are closed. But what does this mean? A closed syllable is a syllable with one vowel—typically a short vowel sound—followed by one or more consonants. Examples of one-syllable words that fall into this category include:

This is by no means an extensive list; however, the point of starting with examples of closed syllables is to familiarize children with short vowel sounds and the patterns of letters that consistently create those sounds. When children move on to look at multisyllabic words, the same rules apply for those syllables. Take the word napkin. It is comprised of two syllables, nap and kin, both of which include a single, short-vowel, followed by a consonant.  Other examples to introduce multisyllabic words with short vowel sounds include:

Non-examples, where the syllable is open, meaning that the vowel phoneme is not “closed in” by a consonant, include:

In order for children to identify how words are made up of different sounds (or phonemes), we must help them to explicitly hear the different components or syllables within those words. We are likely familiar with the “clapping” method, in which educators model how to “chunk” words into their separate sounds (syllables) by clapping for each syllable. For example, clapping out the syllables for people’s names would look like this:

Another option for syllable segmentation involves the use of an abacus, a tool that is typically used for counting and other math skills. Children will slide a bead to the other side for every syllable they hear in the word. Some reading programs suggest a strategy similar to clapping, in which students “tap” or “finger stretch” the syllables in a word. Either way, the process should begin as an auditory practice—no written words or word cards are necessary in this stage. You really are asking children to simply hear the phonemes before they delve into written words.

Short vowel phonemes are introduced organically when children learn about closed syllables. However, the long vowel phonemes are another story altogether; they follow a myriad of different rules when combined with other letters. This is partly what makes the English language so complex! Stay tuned for part III! 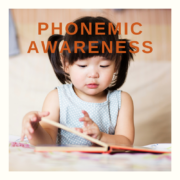 Most adults do not remember learning how to read. We likely remember fumbling through picture books and sitting crisscross applesauce during story time while the teacher pointed word by word on a giant-sized story. We probably remember counting the pages to the next chapter in our first chapter books. We may remember all of these initial interactions with literacy, some fond, some agonizing—but few of us remember how, exactly, we learned to read.

Besides the good ole “sound it out” adage that my parents and teachers would push, I honestly do not remember much of my own initial reading instruction. And while methodology and strategies have evolved, the struggles with reading still exist for many children. There is no magical answer when it comes to learning how to read; however, there are a couple of strategies that parents and educators can employ to ease the journey.

It turns out that the antiquated advice to simply “sound it out” while struggling to read a word is not too far off. However, some key components are missing that would make all the difference—and it starts with phonemic awareness. Phonemic awareness is a fancy way to describe one’s ability to identify, manipulate, and distinguish units of sound—phonemes—and how those units work together to make words. For instance, a child does not need to know how to spell cake to know that it is different from the word bake. Their ability to distinguish the different sounds or phonemes—“c” vs. “b”— is the first step to understanding written language.

Before even putting written words in front of a child to read, try activities that build phonemic awareness just by listening. They can be hugely beneficial, and also much less intimidating than trying to read text right off the bat!

An easy way to start measuring and improving upon a child’s phonemic awareness is to list 3-4 words orally, such as spoon, step, salt, and dot. Pronounce the words clearly and deliberately several times. Then ask your child if the beginning sound is the same for each word. Ask which word has a different beginning sound. Then isolate just that sound—“d” vs. “s.” Prompt your child to simply repeat the individual phoneme “d,” as opposed to “duh,” as this pronunciation could complicate things later. Model how that isolated phoneme sounds, for instance “m” sounds like “mmmm,” not “muh.”

Once they have identified the beginning phoneme (sound) that doesn’t fit the others in the list, ask your child to think of another word that starts with the “d” sound. You can also use image cards to represent the one-syllable words from your list. Have your child sort the picture cards by beginning phonemes. Remind them to orally say the word that the image depicts while they sort. Just remember that the card should contain only the picture—no word or label, as that will come later. With this method, the focus really is on letter sounds in isolation to familiarize beginning readers with letter sounds, then syllable sounds, then words.